Encoding is a fundamental part of computing. It effects pretty much every piece of software ever written, take this XKCD for example: 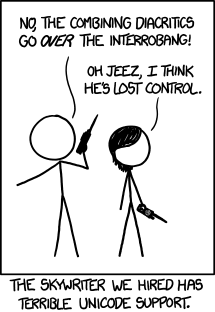 As silly as the comic might be, it reminds us of just how important it is to have a great standard library for handling different encoding that have arise over the years. Luckily, Go has more encoding packages then Batman has gadgets in his utility belt. OK, OK, maybe not quite that many, but a solid set. Most of them happen to be very easy to use as well. Take this example code:

We are able to take a struct and convert it to XML, JSON, binary and hexadecimal in under 40 lines of code, pretty sweet. Since this is suppose to be a blog on things we have learned in our programming adventures, I want to note a few things you may or may not have run into. Notice that the everything struct does NOT have to be an exported type, but the struct fields DO. If you run this code you will notice the is field does not show up in the output and for good reason. The encoding packages use reflection to encode and decode values to and fro, which needs the struct fields to be settable. The is field is unexported, so this makes sense. Just to prove I'm not talking total nonsense (maybe a little) paste this anywhere in the main func above:

Since we need to save reflection for a different article that is all I have for today. Go is missing some more popular formats such as YAML and TOML, but the awesome golang community has stepped up and created some great packages for those encoding as well. Links to those below. As always, questions, comments and applauses are welcomed.

Templating is a pretty popular subject in web development today. If you have done any...

This week we jump into the interesting world of Swift substrings. Creating substrings in Swift...